The Matukar language is spoken in two villages in the Madang province of Papua New Guinea. Native speakers of Matukar call their language "Panau," which means "give me" and is said to refer to the words of their ancestors when they first came to the island (Mowab, 2009). That their ancestors were more recent migrants than speakers of other Papua New Guinea languages in that area may be supported by the fact that Matukar is unlike the Papuan languages on the isle. It is an Oceanic language of the Austronesian family and shares cognates and similar structure with languages found on surrounding Melanesian islands, such as Samoan (Lewis, 2009) (Figure 1).

There are currently about 430 speakers of Matukar (Harrison, 2009). Although this number includes both young children and experienced elders, the effects of the spreading of English and the dominance of Tok Pisin, the national pidgin, puts Matukar at risk for extinction. However, through local language revitalization efforts and projects such as the Matukar Talking Dictionary, it is hoped that Matukar will become popularized among younger generations.

The Matukar Talking Dictionary was compiled in 2009-2011 by Danielle Barth, Gregory D. S. Anderson, and K. David Harrison. It includes basic vocabulary, verb paradigms, and sentence structures in Matukar with corresponding translations in English and Tok Pisin. The accompanying sound files were recorded in Matukar village and feature expert speakers Kadagoi Rawad and Joe Mowab along with John Agid. Because Matukar is situated in a rural part of coastal Papua New Guinea, ambient sound noises, including those of insects, livestock, and birds, may be heard.

We would like to thank all the Matukar language consultants for their cooperation and contributions. The research for this dictionary was made possible by the support and assistance of the National Geographic Enduring Voices Project, the Living Tongues Institute for Endangered Languages, and Swarthmore College. All content is under copyright by the authors. Words and recordings remain the intellectual property of the speakers and community. Any questions or comments concerning this project can be sent to talkingdictionary@swarthmore.edu. 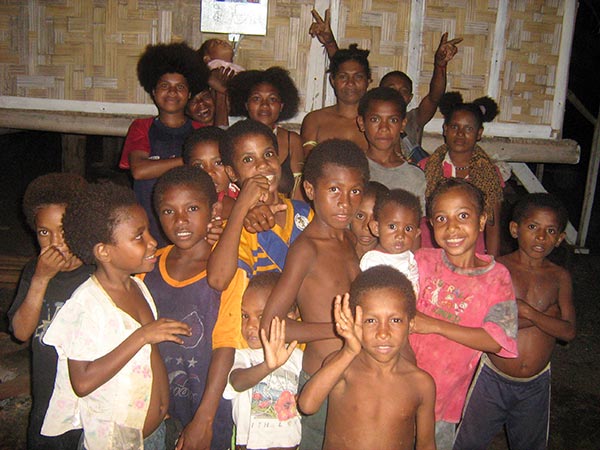 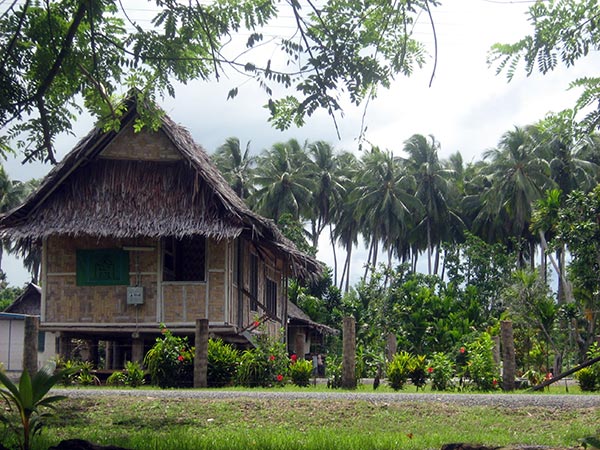 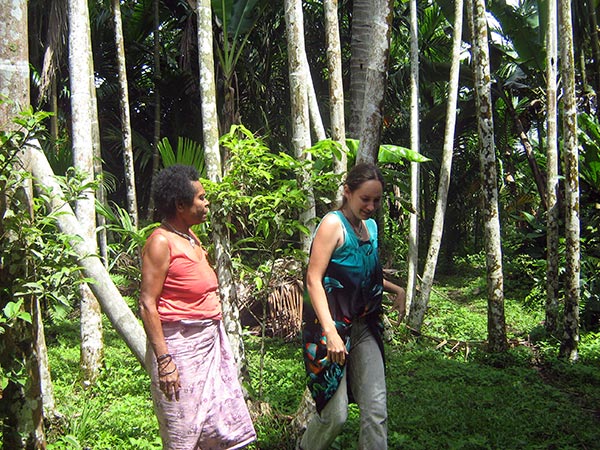 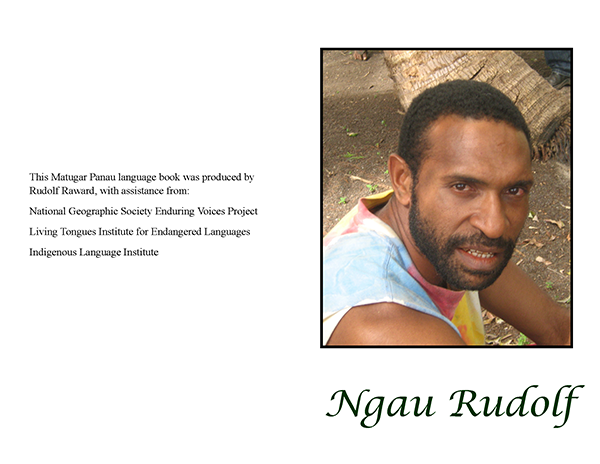 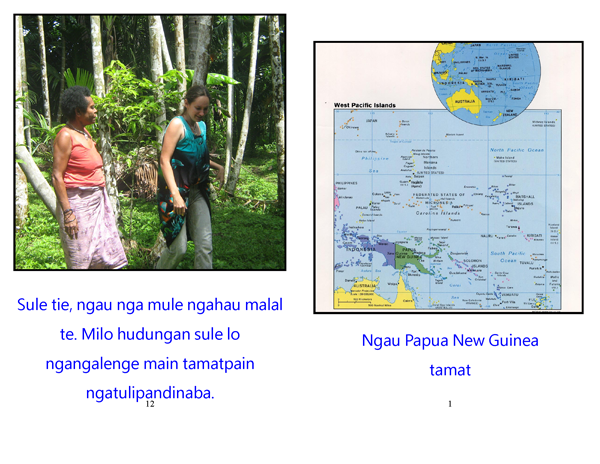 The first book in Matugar was written by Rudolf Raward in April 2010, while at the Language Revitalization Workshop in Santa Fe, New Mexico, hosted by the Living Tongues Institute. Rudolf, who is from Matukar village, explains that, "It is important to speak the language because it keeps our identity. I don't look like a Matukar person physically, but if I speak Panau then it tells people I'm from my place." Working with K. David Harrison and Greg Anderson, he devised an orthography for the language based on the Latin alphabet. Raward then wrote of his visit to the United States to attend language revitalization workshops held by the Living Tongues Institute. Raward hopes to continue the efforts in language revitalization by producing more literature and media in Matukar, as well as recording cultural linguistic traditions found in Matukar song and ceremonies. For a transcript and PDF of Raward's book, as well as a video of him reading it, see below.

My big town is Madang

My small village is Matugar.

I left my mother and I will travel to the white man's place.

Men and women together came and cried for me.

I left my small village and traveled to the white-mans' place.

I arrived in the white-mans' place, I saw many things and many men and women.

I arrived at the white man's place called Santa Fe. There I attended training.

At the Living Tongues Institute I learned many things.

At the end of every class, together we have dinner at restaurants.

One night each of us talked of our place, we talked about our language.

Finally, I came back to my village.

I'll tell everyone the things I learned from school.